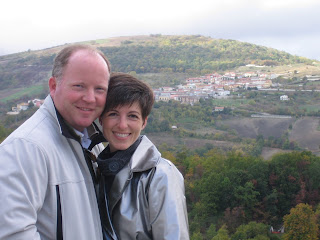 Amy Aldrich has been in the League for seven years, and will be taking on the role of Treasurer next year. This will be a significant change for her since she has spent most of her League time doing community projects. She has always had an interest in finances, so she's especially excited about this role, starting with reviewing the League budget. If there's a better way to manage the budget so that the League can give more money back to the community in grants, then she believes we have an obligation to our members to make a change. And Amy is determined to find improvements! She's highly organized and intensely motivated to do the best job possible next year. And during this economy, she realizes the importance of managing every dollar that comes in and out of the League, which is why she's perfect for the position.

When she's not coming up with better ways to manage the budget, you can probably find her participating in an assortment of activities. She does a lot of needle work and cross-stitch (fourth generation in her family) and runs the family football pool during football season. She's also an avid skier, and has never missed a ski season since she was five years old (except for when she was pregnant). Although skiing and football sound a lot more fun, she's just as excited to get the winning score in her role as Treasurer.