The Junior League of Palo Alto•Mid Peninsula grants over $30,000 to local Non-Profits

Menlo Park, Calif. – Each year, Junior League of Palo Alto-Mid Peninsula (JLPA•MP) supports local non-profits by funding new programs or specialized training for those in need. As part of its community focus on empowering girls in STEM (Science, Technology, Engineering and Math), the 2016 grant awards selection criteria was based on relevance to this 2016 focus area. The committee members worked diligently to ensure all applications were carefully reviewed and considered for relevance to our focus area and League bylaws. After narrowing down the applications to six, the committee members then vetted the final proposals and presented to the board to vote.

16 local non-profit organizations submitted applications to the JLPA-MP and three distinct and worthy organizations were awarded this year’s grants: 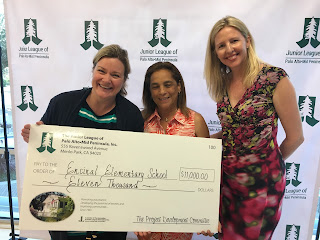 Erica Wehrs conducted research and presented the grant proposal for Encinal Elementary, which was awarded $11,000 to launch the Charlie Cart Project. Charlie Cart is an educational program that connects lessons in Math and Science with Food and Cooking. 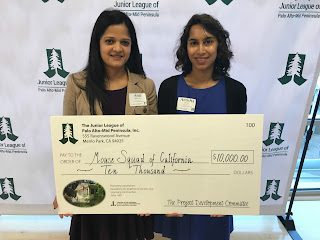 Robin Hindry Enan researched and presented the proposal for The Mouse Squad, which was awarded $10,000 to help fund attendance for over 100 girls in grades 7-10 to Oracle’s Annual Dare 2B Digital Conference in February 2017. 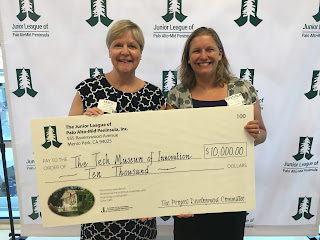 Beth Greenberg researched and presented the Tech Museum proposal, which was awarded $10,000 to fund a toolkit for parents who are interested in fostering their daughter’s interest in STEM.

More information on the Community Grants process can be found at JLPA-MP Grants.

Since its founding in 1965, the Junior League of Palo Alto•Mid Peninsula has contributed thousands of volunteer hours to the local community, supported nearly 100 community service projects, and awarded grants to 192 area nonprofit organizations. In its 50 years, the League has tackled important social issues such as affordable housing, societal violence, literacy and education, homelessness, drug addiction, and at-risk children and youth.

About the Junior League of Palo Alto•Mid Peninsula, Inc.


The Junior League of Palo Alto•Mid Peninsula, Inc. (JLPA•MP) is an organization of women committed to promoting voluntarism, developing the potential of women and improving communities through the effective action and leadership of trained volunteers. The JLPA•MP serves the Peninsula communities of Atherton, Belmont, East Palo Alto, Foster City, Los Altos, Los Altos Hills, Menlo Park, Mountain View, Palo Alto, Portola Valley, Redwood City, San Carlos, Stanford, Sunnyvale and Woodside, and invites women of all races, religions and national origins who demonstrate an interest in and commitment to voluntarism to join our ranks. For more information, visit www.thejuniorleague.org.
No comments: