Welcome to the JLPA-MP Mother's Day Special Edition Blog Feature. This is the third mother-daughter feature in a series of three. Check out the first published article from this series on May 13, 2012.

Was your mother a Junior League member? 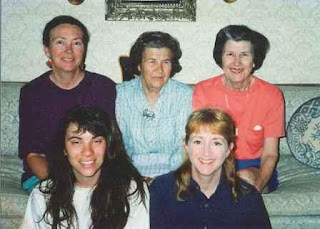 PENNY LAVE: My mother was in the Junior League inLansing, Michigan, from 1935 to the 1970's. She is in the middle of the picture shown to the left. Back row: Penny Reynolds Lave, Eleanor Thoman Reynolds (mother), Elizabeth Thoman Moore. Front row: Julia Lave Johnston (daughter), Wendy Reynolds Barbo (sister who somehow escaped the Jr. League)!


CATHERINE VONNEGUT: My mother, Jean Ann Vonnegut, was in the Indianapolis League, from the 1950’s to 2009 (when she died).

Do you have a daughter who is a Junior League Member?

PENNY LAVE: Julia joined the Eugene Oregon League in the early 90s and transferred to the Sacramento League a few years later.

Describe your experience as a mother-daughter Junior League pair.

PENNY LAVE: I joined the Lansing league in 1960 and transferred right away to San Francisco as a Professional member (that is what we called members who worked and met at night) where I repeated the Provisional course, commuting from Palo Alto. We met at the Mark Hopkins Hotel. It wasn't until the 1970s after Palo Alto had become a League on its own that we had a Professional group. When I was President I chaired two membership meetings each month - one in the morning and one at night on the same day.

I never considered NOT joining the League - it was a way of life. My daughter joined while in graduate school and was quite a bit younger than the rest of the members in Eugene, a student and single. In Sacramento she was working and had babies and not enough time to enjoy it. Times change.

CATHERINE VONNEGUT: I helped my mother as a child in The Shop, when she was an art docent and at other League events. Since my grandmother was also a member, I was pre-destined to be a Junior League member I suppose!!