I met Sarah for the first time last year - we were in the same Provisional class. I was excited to schedule a lunch date with her at Café Borrone's to talk about her upcoming position on the Board. I was genuinely curious about how she managed to land a seat on the Board of Directors after having been in the League only one active year. I assumed that Board members had to have many years of League experience before being asked to participate. She told me that when speaking with her Member Resources representative, she expressed interest in a leadership position, plain and simple. And her actions and involvement along the way have proven her worthy of a position.

I learned that Sarah was initially interested in the Treasurer role. She served as the Treasurer for The Shop this past year and really enjoyed the experience. With her financial background as an accountant she would be perfect for the job. Even though the Treasurer position had already been determined for 2011-2012, she didn't give up. Her tenacity and enthusiasm for a position on the Board impressed the Nominating Committee, because they asked her to be Secretary.

Sarah has a great attitude around work-life balance. Being an accountant she works long hours, but she made it clear that making time for the League is a top priority. She considers this opportunity, to sit on the Board, not only an honor but a way to learn even more about the League. As a Provisional she was impressed by how organized the meetings were, and how dedicated the Co-Chairs and committee members were (our mentors) to making it such a positive experience. She is excited to build a network of friends, and develop relationships with women she knows she would be able to call on if she ever needed support. 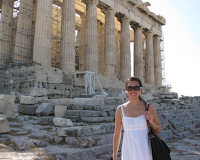 Sara is excited for this upcoming year, especially learning more about how the League operates during a down economy and how things are done differently in terms of fundraising and financials. The League is a top priority for her, even with her crazy work schedule. And when she's not crunching numbers or taking notes at the Board meetings, you might find her at the San Francisco Opera. She's no longer a ballet dancer, which she was for 15 years, but has developed a passion for the performing arts. She has a variety of interests including opera, accounting, and the Junior League. When she has a passion for something, she dedicates herself to it fully and makes it a part of her life.