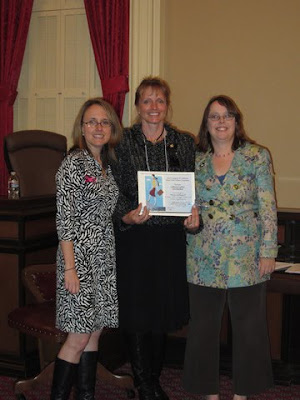 We would like to extend CONGRATULATIONS times-two to our Junior League of Palo Alto-Mid Peninsula (JLPA-MP)member Cat Carlton. She served as our League Senior State Public Affairs Committee Delegate (SPAC) during the 2010-11 League year.

FIRST, she was elected President of the California State Public Affairs Committee (SPAC) for the 2011-2012 League year. In this role, Cat will be leading 32 Junior and Senior SPAC representatives from the 16 Junior Leagues of California in legislation advocacy, helping to support and co-author bills relevant to our focus areas, for passage into law up in Sacramento. This is a great honor, and Cat is only the third JLPA-MP SPAC Delegate to be named SPAC President in JLPA-MP history. Congratulations, Cat - thank you for representing us so well!

AND, Cat just received the Above and Beyond Award at the Junior League of California SPAC state conference. Here is what they had to say about Cat when they honored her with this award:

California SPAC Above and Beyond Award: Cat Carlton
This honor is awarded to a Junior Leagues of California SPAC delegate who made significant contributions to SPAC by working above and beyond her role or the normal call of duty. The recipient has demonstrated outstanding initiative, exemplary leadership, and helped advance the development of SPAC itself. Through consultation with League Presidents, SPAC delegates, and Sub-Committee Members, the Above and Beyond Award is given by the SPAC Chair on behalf of the delegation for outstanding service to SPAC.

"Cat's work goes above and beyond. She continues to lead our organization in all things SPAC, and now, will be leading all the Jr. Leagues in California. We are so proud of her and her accomplishments. This award is well-deserved recognition for her talents and leadership. Congratulations Cat!" - Stefanie Bruggeman, President JLPA-MP 2010-11

Join Us in Congratulating Cat Carlton, the California SPAC 2011-2012 President!