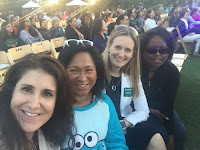 August 10 was an inspiring finale for the Junior League of Palo Alto•Mid Peninsula’s (JLPA•MP’s) two-year partnership with Technovation. League members gathered at Google’s campus to cheer on 12 finalist teams from around the globe at the 2017 Technovation Challenge World Pitch Awards.  The theme of the event, “Girls for a Change”, focused on diversity and inclusion, and empowering girls to be innovators and leaders - initiatives that strongly resonate with JLPA•MP’s mission and community focus.  Google CEO Sundai Pichai jumpstarted the event by addressing the teams of girls.  "To the girls who dream of being an engineer or an entrepreneur, and who dream of creating amazing things - I want you to know that there's a place for you in this industry. There’s a place for you at Google. Don't let anyone tell you otherwise.” It was a relevant tone and message to begin the evening where we would hear about the amazing accomplishments of these girls.

Every year, the Technovation program invites girls from around the world, between the ages of 10 to 18, to learn and apply skills to solve real-world problems in their communities by creating mobile app solutions.  In a science fair format preceding the evening’s awards ceremony, guests chatted with the teams and learned about mobile app solutions that enabled individuals to fulfill the wishes (needs) of underprivileged children in India, helped people to visually recognize different types of waste and how to recycle according to the laws in Canada, provided basic information and resources to help new refugees in the U.S., and gave a platform to report cases and support victims of Female Genital Mutilation in Kenya.   All 12 of the finalist teams were awarded seed money to continue growing and developing their business plans and mobile apps.  The Senior Division grand prize was awarded to a team from Kazakhstan who created a safety-tracking app for women called QamCare and the Junior Division grand prize was awarded to a team from Hong Kong who developed a Dementia-Care Companion app for patients and families. 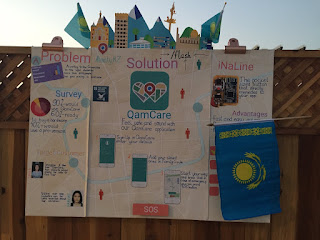 As the evening drew to a close, League members voiced sentiments about the positive impact of the JLPA•MP/Technovation partnership in our Silicon Valley communities. The two-year partnership with Technovation not only resulted in the increased engagement of local girls in the mobile app challenge, but also developed new partnerships with youth organizations and female mentors in the tech and business community.  To learn more, the JLPA•MP’s 2017 Annual Report highlights the impact of our Technovation partnership as well as our other strategic partnerships and projects committed to empowering girls to be STEAM leaders of tomorrow.

Technovation is a San Francisco nonprofit which offers girls around the world the opportunity to learn the skills they need to emerge as tech entrepreneurs and leaders. Every year, they invite girls to identify a problem in their community, and then challenge them to solve it. Girls work in teams to build both a mobile app and a business plan to launch that app, supported by mentors and guided by Technovation’s curriculum.

The JLPA•MP collaborated with two chapters of the Boys and Girls Club and the San Carlos Smart-E afterschool program. Over the course of three months, League volunteers had the opportunity to work with teams of enthusiastic girls who saw real problems in their communities that they wanted to address with their apps. Ideas included helping pet owners find the healthiest food and local-pet friendly parks for their pets, helping people find local quality groceries at low-cost, and helping students manage depressive symptoms. The program allowed the girls to bond and participate with their friends while learning about themselves, discover their strengths and increase their confidence with technology skills. Somewhat of a surprise to those who had never thought about participating in a technology challenge was how much they loved working with code and design concepts.