Our Home Tour Committee has been hard at work planning the League's fourth annual Finishing Touches Home Tour and Boutique. The San Mateo Daily caught up with our Co-Chairs Helen Ungerman and Kathleen Castaillac and committee Treasurer Pam Wagner at a recent planning session at the Rosewood Sandhill, see the article here.
﻿
﻿The festivities kick off this Friday, December 2nd, with a festive luncheon and boutique at the Rosewood Sandhill, followed by a self-driven tour of the lovely Atherton homes and then the Mistletoe and Martinis Cocktail Party and Boutique at 6:30pm.


On Saturday, December 3rd, the festivities continue with the Designer's Breakfast & Guided Tour followed by the self-driven and shuttle driven tour. And don't miss the Boutique at the Rosewood, open until 3pm. See details here.  Tickets for the Tour and Mistletoe and Martinis Cocktail Party will also be available for purchase at the door.

We learned how to TWEET a photo at the Communications Team Social!

By Catherine Ross Stoll, Communications Team
On November 14th the Communications Team got together for a social (thanks to Gae Sares for organizing it) at The Office Bar and Grill in San Carlos. While we were there, having a good time and enjoying some yummy food, the subject of Twitter came up in our conversation.

I suggested we take a photo right then and Tweet it out. We had the waiter take our photo on my iPhone and I immediately tweeted the photo straight from my iPhone using the hash tag #jlpamp to make it easy to search for. Michelle Hostrup (our Social Mediaa Assistant Chair extraordinaire) then searched for that hash tag within her Twitter app on her iPhone, and retweeted my tweet within a few minutes of the photo being taken. So easy!
If you want Michelle to see your JL-related tweets too, please use the hash tag #jlpamp and she can either retweet it or use the info in your tweet to compose her own tweet. A quick and easy way to bypass the web form if there is something happening that's worth tweeting about right away.
Follow us on Twitter today!
No comments:

Highlights from the November General Meeting

The November General Meeting had everything! There was a yummy dinner, loads of information about our Community Projects, a discourse with Sustainers and outfits from The Shop, adorable children in a Home Tour video, and more!

Sprinkles, a big League supporter, will again donate the proceeds of a special Home Tour cupcake. Last year their donation exceeded $2,500. I know many League members will be stopping by Sprinkles the week before the Home Tour as the special cupcake (Peppermint-Vanilla) is only available for a week. I hope they freeze well because I'll be buying a lot!

The Home Tour Committee also showed an adorable video featuring “Toddlers & Tiaras” – who knew we had a rival to Imelda Marcos in our League? They also talked about their “refer a friend” promotion and all their other events, emphasizing that the Cocktail Party would have college football on television for those who cannot bear to miss one moment of the game.

Catherine Carlton, 2010-11 Sr. SPAC Delegate, shared about how the month of May became perinatal depression awareness month. She added that Radio Disney had picked it up and that it was becoming a nationwide movement. The League isn’t often associated with advocacy, but there it is in action!

Susan Herman, Executive Director of Help One Child, made an enlightening presentation about foster children. Help One Child partners with Fostering Families, a League project. The statistics she shared were extremely sad, but it was clear that the League project is making a positive impact.

Nominating Chair Tara Roussel presented the President Elect Elect, Joy Peacock, via photo and words since Joy couldn‘t make the meeting. Besides giving great reasons for choosing a leadership role, Tara encouraged people to self-submit. The ever fabulous Naomi Chavez-Peters facilitated a discussion with uber-accomplished Sustainers Susan Martin, Jean Limbach and Sarah Rosendahl about taking their League learned skills and putting them to work in the community.

Many wonderful finds from The Shop were strutted across the stage by members of The Shop committee. The outfits were great!

And Meaux got us out on time! Our heads were filled with a lot of good information and feeling good about being a League member!
No comments:

The provisional class had two very exciting events last month including our first meeting on October 18th at the Garden Court Hotel in Palo Alto and a Provisional Class Social at the Dutch Goose on October 27th. The overall theme of the Provisional Meeting was how the Junior League and its members make an impact in our community. 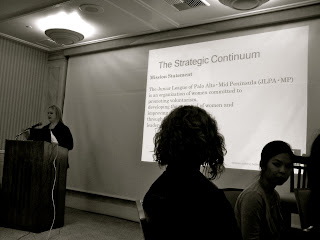 We listened to a number of excellent speakers including Vanessa Roach, Special Projects/Community MAL, who gave us a brief introduction to The Strategic Continuum. Vanessa spoke about six aspects of our Strategic Continuum: Impact Community, Increase Visibility, Recruit & Retain Members, Train Volunteers, Raise and Manage Funds, and Develop Projects and Make Grants.

After Vanessa’s speech, we were introduced to Polly Neumann, Senior SPAC Delegate, and Catherine Carlton, SPAC State Chair. During the introduction to SPAC, the provisionals were educated on successful SPAC sponsored legislation and how the Junior League supports and sponsors bills. Cat also told the provisionals about the many ways we can become involved with SPAC including the “There Ought to be a Law” contest, Day at the Capitol event on May 6th, and the Public Affairs Special Interest Group that will hopefully be launched in 2012.

Provisional Member Kristin Barker especially enjoyed learning about SPAC and said, "I really enjoyed listening to Polly Neumann and Catherine Carlton speak about SPAC. I think it's great that Junior League helps to create and sponsor legislation regarding important issues in our community and state." Lisa Hammon, also a Provisional, commented about SPAC, "I enjoyed learning about the Junior League State Public Affairs Committee, how the League has taken action on important state and national issues and the legislation they have drafted, like the children's bicycle helmet law. Their work is very inspiring."

The members of the Provisional Class enjoyed mingling on a more casual level at the Dutch Goose at the end of the month, and look forward to the next Provisional Meeting!
No comments:

Riding Into Fall With RAFT


This was my second year volunteering with the League at Resource Area For Teaching (or RAFT) and, I have to say, they're as impressive as I remember. I really admire them for all they do to make supplies affordable for teachers. We were at the store site in San Jose (as opposed to the Sunnyvale office where the previous DIAD projects were) and actually able to see what they had for sale -- it was quite impressive.
This year, Valerie Dennis was the DIAD member in charge. The turnout was a total of ten members with four provisionals, four actives, one sustainer and one non-League member. Mary was the RAFT employee helping us and the one who instructed us on our projects for the day.
We completed four projects:
Unlike previous years, we all got to work together on each project!
Provisional Christine Gibson said she really likes the idea of DIAD projects because it gives her a taste of the community service component of the League. Kristin Barker, also a provisional, thought it was a nice volunteer opportunity for the weekend; it was fun and let her feel like she'd accomplished something. Meaux Costello, our League President, was glad to see the energetic members of the Junior League helping at RAFT and thought it was a great place with fabulous resources. She had a blast her first time volunteering.
Overall, it wasn't too long of a day but we managed to get a lot accomplished. Everyone left RAFT feeling good about what we'd done to help and happy that the League had chosen to continue with this DIAD project. It was a really fun afternoon and I look forward to going again next year.
No comments: